We at Peace In Christ are proud to support the Neuendorf family currently serving in Puerto Rico!

Rev. James and Deaconess Christel Neuendorf serve as missionaries in Puerto Rico.  Both have served in the region (Panama, the Dominican Republic, and now Puerto Rice) since 2008.

James previously served in the Dominican Republic as an evangelist.  He also helped to provide Latin American pastors and lay leaders theological resources in their language through a variety of media, including video productions, audio resources and books.  James served his vicarage in Santo Domingo.  James now serves as a church planter and pastor in the city of Ponce.  His focus is to establish a strong Lutheran presence in the city which will boldly proclaim the Gospel and meet the physical and spiritual needs of a community that is hungry for the Gospel and for hope.  He is also working to create a generation of local leaders, well-grounded laity, and future pastors who will be able to continue to spread the Gospel throughout Puerto Rico, around the Latin America region, and the world.

As a deaconess, Christel is involved in the long-term disaster relief efforts at the mission's various mercy houses.  From these places, LCMS missionaries and Puerto Rican Lutherans offer food, water and other basic necessities to community members affected by natural disasters.  She is also engaged in assessing needs in the community and coordinating efforts to meet those needs as a congregation and mission.  In addition to those two things, she also works to ensure that the other LCMS missionaries serving in the Latin America and Caribbean region are properly oriented, trained and cared for during their time of service.

James and Christel both grew up in Michigan.  James, as a pastor’s son, has called many places “home,” most recently Ann Arbor, Mich.  There he attended Concordia University and met Christel.  He graduated with a bachelor’s degree in religious studies and earned his Master of Divinity at Concordia Theological Seminary, Fort Wayne, Ind.  Christel is a native of Flushing, Mich. She also graduated from Concordia University, Ann Arbor, Mich., with a degree in business.  She received her deaconess certificate from Concordia Theological Seminary, Fort Wayne, Ind. 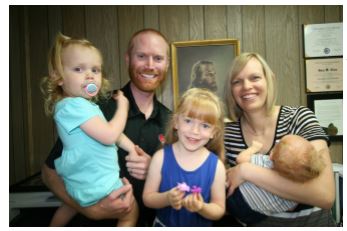 Anthony DeLiberto has accepted the call to serve as Pastor at Grace Lutheran Church in Henderson, Nevada.  We continue to pray for the DeLiberto family as they move back to the states and transition to this new adventure in the ministry.

Why support a missionary?

Two good reasons.  First of all, in Acts, chapter one, Jesus told His disciples to “be His witnesses in Jerusalem, in all Judea and Samaria, and to the ends of the earth”.  We understand those words to mean that we are to be His witnesses not only in our immediate neighborhood, but also in our country and to all the world.

By supporting a missionary outside the United States, we can be constantly reminded of the importance of being a witness to all the world.  Plus, it can be a great example to our young children (and youth) of the importance of reaching out to all people (not just those whom we know).  Furthermore, those young people can have the opportunity to be directly involved with a missionary in Preschool and Sunday School activities.

Secondly, the Lutheran Church – Missouri Synod requires missionaries from our Synod to gain financial support from individuals and congregations.  They are not allowed to begin their work until they have achieved a certain level of financial support.  Without individuals and congregations supporting them, our church would not be the witness to all the world that Christ wants us to be!

Why support a missionary from Puerto Rico?

When our Discipleship Ministry at Peace in Christ first considered adopting a missionary, they looked into what our Minnesota North District is currently doing in regard to witnessing to the world.  It made sense to potentially work with them.  We learned that the District has, over the last four years, committed to partner with the mission work in Puerto Rico.

We also learned that two missionaries are currently working in Puerto Rico.  We then asked our Mission people in St. Louis, Missouri (the headquarters of our church body) if both of those two missionaries were fully “funded” to be a missionary.  We were told that the DiLiberto family still needed some support.

Realizing that the proximity of Puerto Rico to Hermantown would make it much easier for our members to potentially make mission trips there in the future, it seemed only natural for our congregation to adopt the DiLiberto family.

If you would like to help support the DiLiberto family (at any time), visit either the PIC app (look for the “Give” tab and then select the “PR Mission family”) OR place a check in the offering plate made out to “Peace in Christ” with the memo line stating: “PR Mission family”.